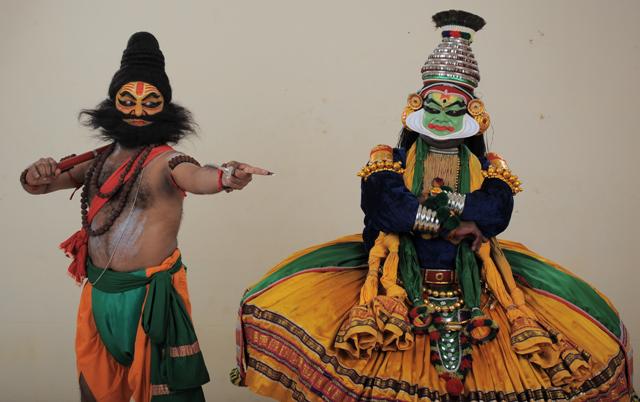 The wedding of Seetha

Seethaswayamvaram is the second aattakatha in Kottarakkara Thampuran’s Ramayana octalogy. The story play traces the incidents in Ramayana from Shree Raman’s and his brothers’ childhood. Sage Vishwamitra takes Shree Raman and Lakshmanan with him to the forests to protect his yaga from demons. Raman with his brother Lakshmanan vanquishes these demons. A pleased Vishwamitra then takes the brothers to the palace of Janaka, king of Mithila. There Raman attempts to string Shiva’s bow Thrayambakam, a challenge that King Janaka has set for anyone that wants to wed his daughter Seetha. Raman proves too strong for the bow and it snaps in his hands. The auspicious marriage between Raman and Seetha, and his and her respective brothers and sisters follows. On stage, however, this is not played out and the focus is on the intense confrontation between two Ramans, both incarnations of Vishnu. On one hand is the mighty and short-tempered Parashuraman, disciple of Shiva, incensed by the sacrilegious breaking of his teacher’s bow. On the other is the serene Shree Raman who tries his best to pacify Parashuraman. The stark contrast between these characters and especially the rage of Parashuraman is the central theme of Seethaswayamvaram on stage.