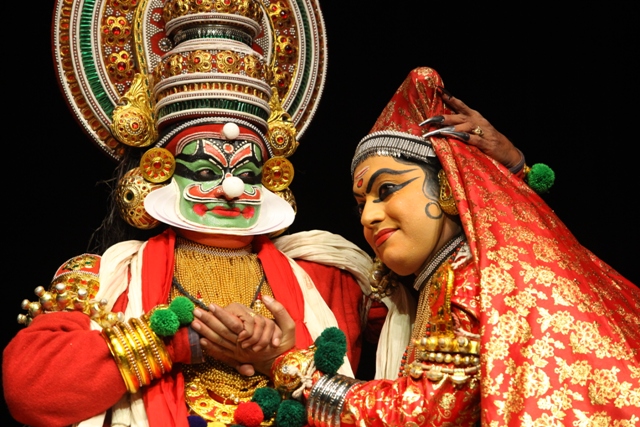 Irayimman Thampi, another court poet of Travancore to flourish in the first half of nineteenth century composed three great Kathakali plays, Utharaswayamvaram, Keechakavadham and Dakshayagam. The first two of these are from the Virata Parva of Mahabharatha when Pandavas, the protagonists of the great epic are in exile. As per the rules of a dice game played by Pandavas and Kauravas, the former are staying in disguise in the kingdom of Virata. Kaurava prince Duryodhana, the antagonist, plots to uncover the identity of Pandavas in a bid to extend their time in exile. He sends his trusted lieutenant Thrigartha to steal cattle from Virata, so that Pandavas may be provoked to reveal themselves and fight. King Virata is foiled and imprisoned as he tries to thwart Thrigartha. How the brave warriors Bhima (disguised as a cook) and Arjuna (disguised as a eunuch) comes to the rescue of their host forms the central theme of the play. Arjuna the hero, is supported in his endeavour by Virata’s young son Utharan.

Main characters and artistes in the order of appearance: