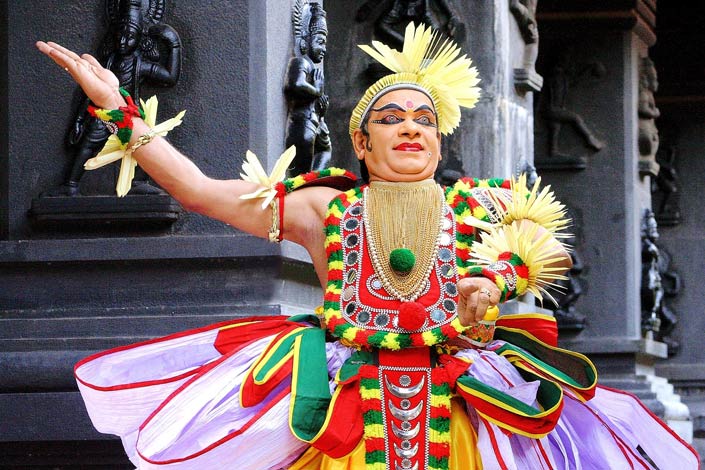 A solo dance exposition, the Thullal is of three types – Ottan, Sheethankan and Parayan. It is classified based on the differences in costume, style of dance and also the metre and rhythm of the Thullal songs. Its origin is attributed to Kunchan Nambiar, a comic genius and one of the great poets of Kerala. Though based on classic principles of Natya Shastra, the technique of this art is not rigid. The songs, written in simple Malayalam and replete with wit and humour, the simplicity of presentation, and the direct appeal to everyday life made Thullal very popular. The instruments used in Thullal are the maddalam and the cheyyam [small bronze cymbals]. The cymbal player who maintains the rhythm, also accompanies the actor-dancer in singing in choral style. Of all Thullal dances the Ottanthullal is the most popular. The costume is peculiar and impressive. The metre and rhythm of the Ottanthullal songs are very fast, and the dance as such has a high tempo. In Sheethankanthullal, the metre and rhythm of the songs are slower than in Ottanthullal, and consequently dance also is slower in tempo.

Ottanthullal and Sheethankanthullal are included for the first time in Utsavam in Dubai.