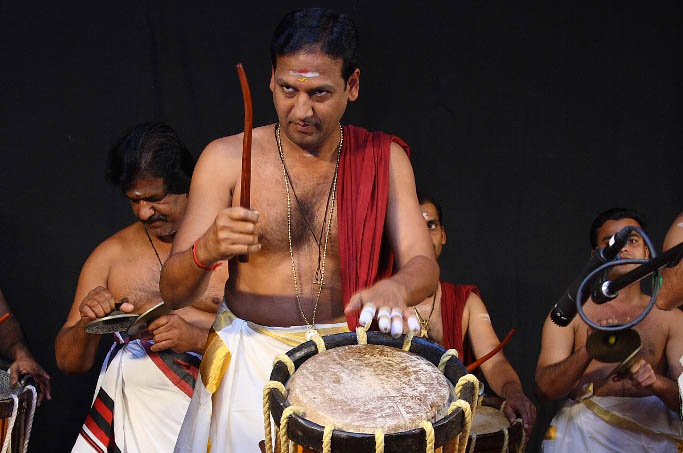 An ensemble of chenda drummers accompanied by ilathaalam (heavy brass cymbals) that create cascading rhythmic patterns which, with their ever increasing crescendos, transport the audience in to a rapturous frenzy.

Born in 1964 to Panamanna Appu Pothuval and Madhavikutty Marasyar, Sasi trained as a Chenda artiste under his father. He later had his higher studies in Thayampaka under Pookkattiri Rama Pothuval. He was also a student at Kalamandalam (1984-1986) and Kottakkal (1990 onwards). He has served as a faculty at the latter institute from 1994 to 2009. Presently he is an unaffiliated artiste performing for different art forms like Thayampaka, Kathakali and Melam.

Born in 1991 to Ramakrishna Marar and Shobhanakumari in Alayatt Veetil, Nidheesh has trained under Kalamandalam Radhakrishnan, Cheruthazham Chandran and Sadanam Vasudevan. Nidheesh has proved himself as an able Chenda artiste at a young age and has also performed in Double Thayampaka with several leading Chenda artistes