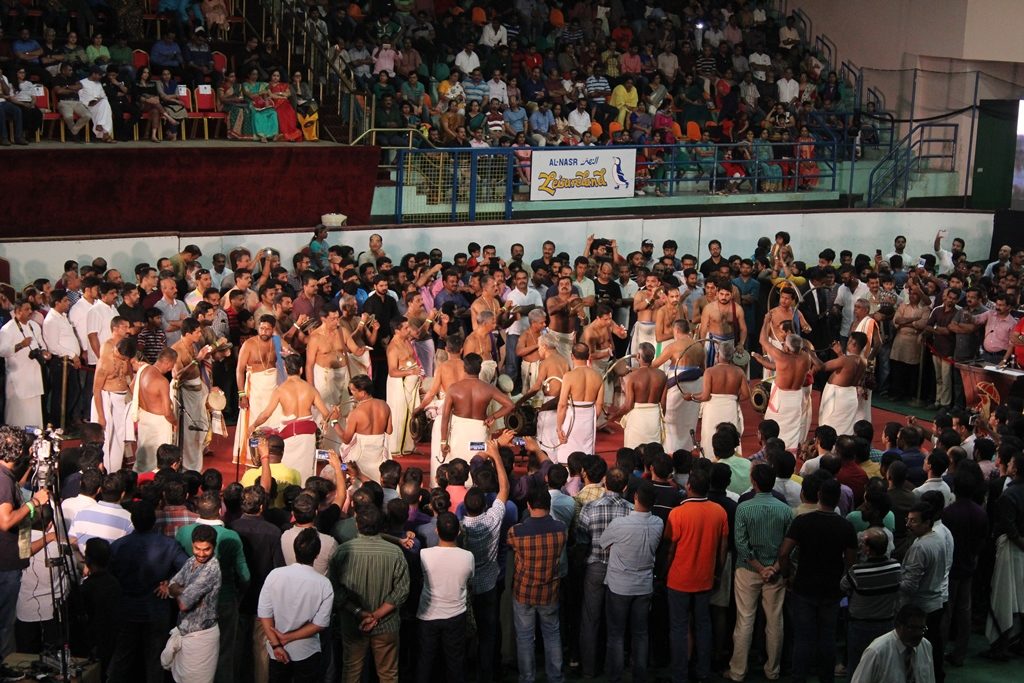 Panchavadyam (literally a recital of five instruments) is an ensemble percussion art form that has graced almost all major traditional festivals of Kerala. Though historical references to ‘Panchavadyam’ are available at least from ninth century CE (including copper plates and rock inscriptions), historians are of the opinion that it would most likely have been a very different ensemble than what we have today. In its present form, Panchavadyam was formulated in the first half of twentieth century in central Kerala and has since enthralled audiences across the state and beyond. While Panchavadyam adheres closely to the structure and approach of other percussion art forms in Kerala and rhythmic philosophy of India, it is markedly different by the absence of Chenda which is the dominant instrument in all other melams (percussion ensembles). Instead it combines three different drums (membranophones) namely Thimila, Maddalam and Idakka. The former two are played with fingers while the artiste would use a wand to play the latter. Each of these have their own unique tone, texture and style and combine together with Ilathalam (brass cymbals) and Kombu (horn shaped wind instrument), to bring out a highly structured and delectable symphony of rhythms. Panchavadyam is based on the seven beat rhythmic cycle called Adantha but stands out for its more complex treatment of this scale compared to a Melam like Pandi that also uses the same scale. It also provides sufficient room for improvisations and individual virtuosity which is usually absent in other melams of Kerala. While the fast paced combination sequences thrill the lay listeners to no end, it is usually the solo interludes with emphasis on virtuosity that is keenly followed by the connoisseur.