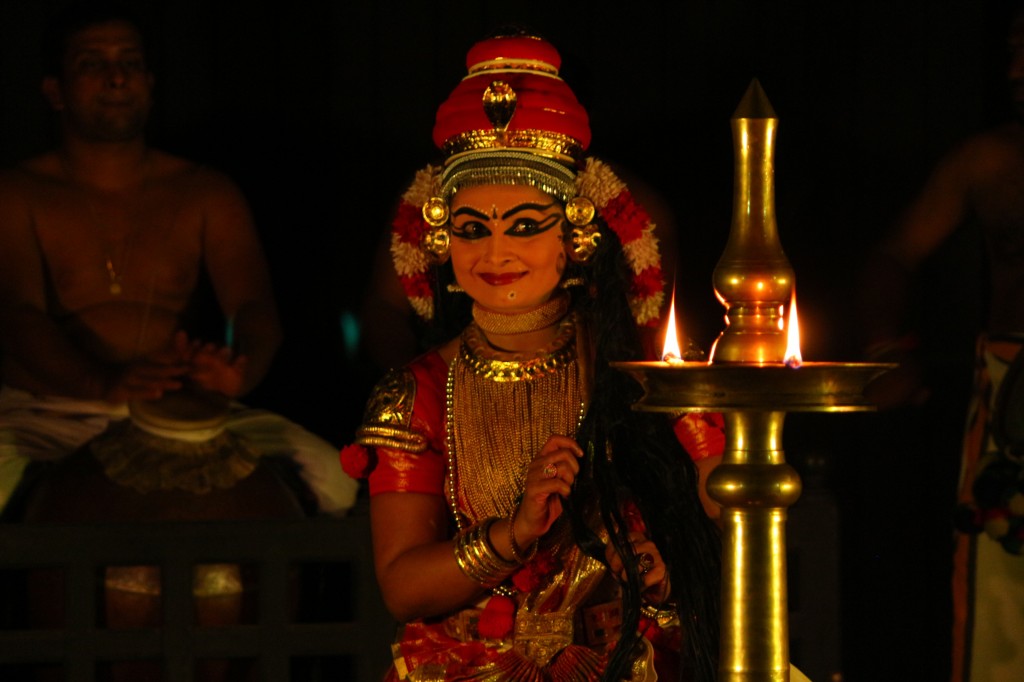 Nangiarkoothu is a women only theatre that closely follows the contours of Koodiyattam. In Shailooshakam, Akrooragamanam (The visit by Akroora), an episode from the Sreekrishna Charitham by the Cheraman King Kulashekaran would be enacted. The act depicts Akroora, benign servant of the cruel King Kamsa biding his time for an opportunity to meet Sreekrishna. Luck favaours him when Kamsa orders him on a mission to bring Krishna and his brother from Vrindavana to his palace. The elation of Akrura and his reminiscence as he travels to Vrindavan would be portrayed by the Nangiar (actress) on stage.

Akrooragamanam (The Journey of Akroora)

Generally Shreekrishnacharitham Nangiyaarkoothu is the narration of Sreekrishna’s stories by a friend of Subhadra, sister of Sreekrishna, by the name Kalpalathika. She had set out to search out a pair of very special bodices of subhadra, which was lost during a tussle with a demon who was trying to abduct her. During the process, she recapitulates the incidents that led to her present state inter-alia narrating the entire history of Shree Krishna commencing from the formation of Mathura Kingdom to the abduction of Subhadra

In that, as a scheme to kill Rama and Krishna, Kamsa deputes Akroora to bring them to Mathura in the pretext of taking part in a sacrifice of bow (Dhanuryaaga). Akroora proceeds and he thinks about the greatness of Almighty. These thoughts of Akroora are the main content of “Akrooragamanam” Koodiyattam

Akroora, listening to Kamsa’s command sets out to meet Krishna, who was longing to meet for quite some time. During the journey he gets immersed in various thoughts regarding almighty who has presently incarnated as Shreekrishna. He especially recalls the various forms that the Lord had assumed to protect the world in general and that of Narasimha in particular. Due to these thoughts and hence, not knowing the distance he enters Vrindavana. There on the ground he finds the sand implanted with the footprints of Krishna with the symbols of Mahavishnu such as the conch and lotus. He immediately pays homage and applies the sand on his body to be carried to ecstasy. Finally he reaches where Krishna was residing and finds the latter watching the milking of cows in full content. He introduces himself and Krishna welcomes him. This is the essence of what would be enacted in detail here