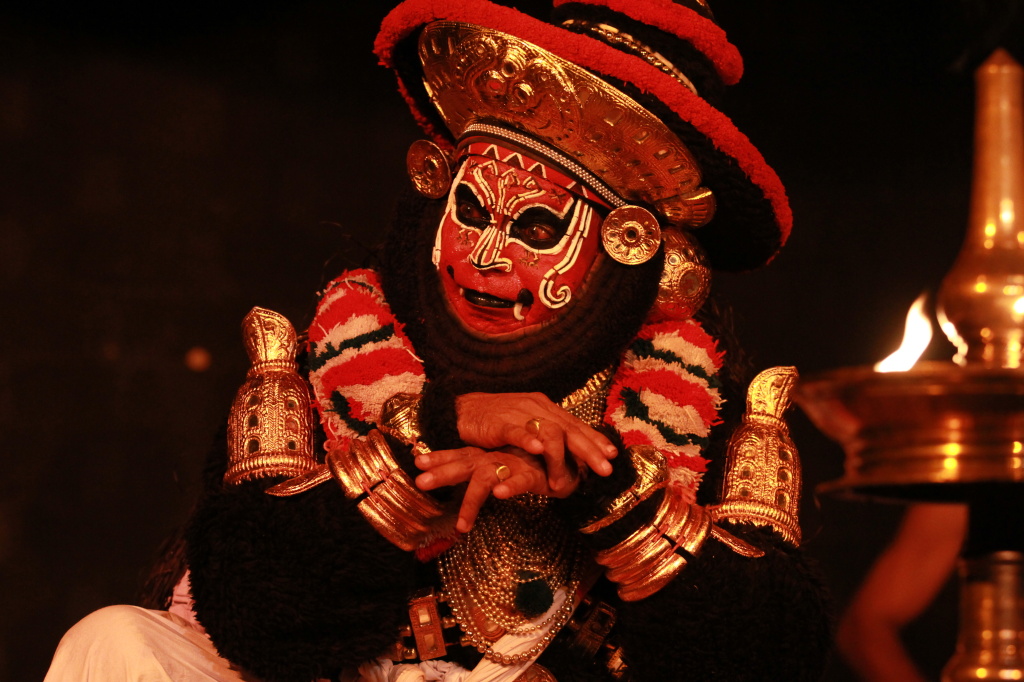 Recognised by UNESCO as one among the “Masterpieces of the Oral and Intangible Heritage of Humanity”, it is the only surviving Sanskrit theatre in the world. Extant over 2000 years, it is arguably the oldest existing classical theatre form in the entire world.

Abhisheka Natakam (The Drama of Coronation) is written by Bhasa, a scholarly playwright believed to have lived between 2nd century BC and 2nd century CE. He has written a number of plays and short plays including “Pratima Natakam”, also taken for Koodiyaattam performances.

The emphasis (and beauty) of Koodiyaattam lies in its attention to minutiae of the plot or characters. Narrating a tale through this theatre would take several weeks or months, and individual performances seldom focus on the narrative. Balivadham (slaying of Bali), an act taken from the Abhisheka Natakam of Bhasa, enacted in this edition of IKKF would be realised in three parts. The first two would form detailed onstage portrayals of the two protagonists, Shree Raman and Sugreevan. Nirvahanam, as these portrayals are called in Koodiyaattam, involves the character conveying to the audience his or her genesis, pedigree, great exploits and recent events in his or her life that have brought them to the current situation in the narrative. This portrayal is usually divided into three parts, viz., anukramam, samkshepam and shlokartham. Anukramam involves traversing backwards in time as the character introspects the stages through which he or she has passed to reach the current situation. Samskehpam is usually enactment of the salient events that happened before the current situation. Shlokartham, the principal part of the Nirvahanam, dwells in detail on the recent past that left the character in his or her current plight.

Two days of Nirvahanam shall be followed by Koodiyaattam proper where the characters come together on stage and play out the Balivadham act.

This part would commence with a purappadu in which Shree Raman states how he has won the confidence of Sugreevan. He then proceeds with the anukramam and samkshepam, where he narrates how he reached the ashram (hermitage) of sage Agasthya with Seetha and Lakshmanan before proceeding to Dandakaaranyam. He then narrates how they built an abode in the forest and lived there for a while and the events that led to the abduction of Seetha by Ravana. In the principal part of the Nirvahanam, he portrays his abject misery at Seetha’s separation and how he sets in search of her with Lakshmanan. He narrates his meeting with the dying Jatayu and his subsequent meeting with Hanuman and Sugreevan. The narration ends with his demonstration of his prowess to Sugreevan to embolden the latter to challenge Bali to a duel.

In his anukramam and samkshepam, Sugreevan traces the origin of great clan of monkeys (vanaras) to the beginning of creation. He then builds up the narrative till his elder brother Bali is coronated as the king of vanaras. In his main Nirvahanam, Sugreevan narrates how Bali slays a demon Dundubhi and how his brother Mayavi plans revenge on Bali. As part of his plan, Mayavi challenges Bali to a duel and lures him into a cave. Though Bali slays Mayavi in the cave, the latter tricks Sugreevan into believing that Bali has been killed. Sugreevan closes the mouth of the cave with a large stone and returns to his palace and assumes the kingship of vanaras. This causes a bitter rivalry between Bali and Sugreevan, bringing Mayavi’s plan to fruition. Sugreevan fears for his life from the mighty Bali and escapes to the Mount Malaya where Bali cannot follow him owing to a curse. Sugreevan is accompanied by his friend Hanuman to Malaya, where the two meet Rama and Lakshmanan in search of Seetha. They strike a friendship and reach an agreement to help each other.

Bali is the principal character in this act. Sugreevan challenges Bali to a duel and an enraged Bali accepts the challenge. Tara, the consort of Bali, is afraid for his life and tries to prevent him. Bali does not heed her warning. To comfort her, he narrates some of his great exploits and boasts about his invincibility in a duel. Bali and Sugreevan then commences a ferocious fight during which Shree Raman strikes Bali with an arrow. The fallen Bali is then consoled by Shree Raman. Bali realises his follies. He passes away and the act comes to an end. The coronation of Sugreevan, though part of the written play, is usually not performed on stage.