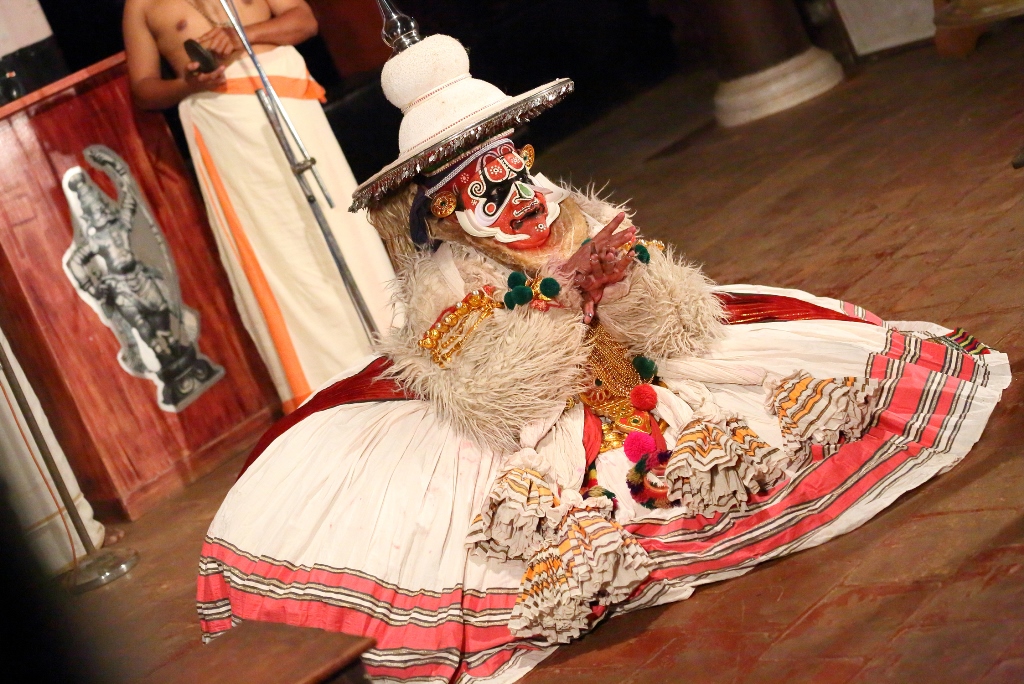 The play begins with a beautiful contrast of emotions (rasa) between the enraged Bhima and pacifist Yudhishtira. After Yudhisthira placates Bhima, the narrative progresses with the visit of Sage Lomesha, who carries news of Arjunan’s victories in aid of Indra. Pandavas are further elevated by a visit f 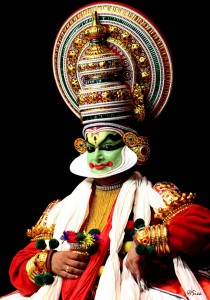 rom Lord Krishna. Visits by Sage Lomesha is skipped on stage and usually the enraged Bhima (a picture of showryagunam) is followed by a romantic one in a beautiful romantic interlude (pathinjapadam) with his consort Paanchaali. At the end of this scene, a gentle breeze carries a beautiful, fragrant Sowgandhikam flower to Paanchaali. Enchanted, Paanchaali entreats Bhima to bring her more of those flowers. An enthusiastic Bhima sets out in haste to fulfill her wish. Hanuman, the elder of the Vayuputhras, divines his younger sibling’s mission and decides to test his strength and temper his arrogance. Hanuman transforms himself into an old, invalid monkey and lies on the path of Bhima. An entertaining exchange follows between Hanuman and a haughty Bhima who bids the old monkey off his path and is asked to move him and continue on his journey. Bhima, humbled by Hanuman, soon realizes the identity of the old monkey and offers his deep affection and respect to his elder brother. The play usually ends here on stage while in the actual narrative written by Kottayam Thampuran, Bhima proceeds to Vaishravana’s garden where the Sowgandhikam flowers grow. He thrashes the demons guarding the flowers and brings a great many of those flowers to Paanchaali.

Sowgandhikam, as it is often called, with its simple plot, endearing music and entertaining characters is the most popular among the four plays of Kottayam.