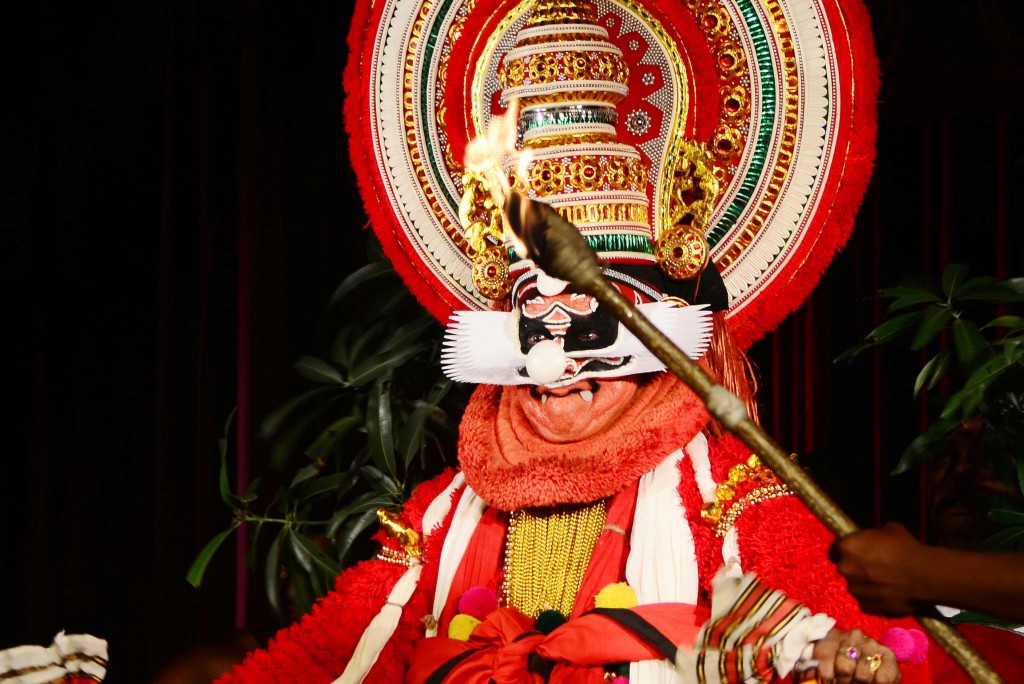 Rivalry between Kauravas and Pandavas, paternal cousins, for the throne of Hastinapuram forms the central story of the epic Mahabharatham. In a bid to eliminate Pandavas, Kaurava prince Duryodhanan constructs a palace of wax and other inflammables in Vaaranavatham. Bakavadham, begins with Pandava prince Yudhishtiran being instructed by his uncle and Duryodhanan’s father, Dhritharashtra, to move to Vaaranavatham and stay at the new palace there. However, in its enactment, the play usually commences with Pandavas being visited by Khanaka, a mason sent by the 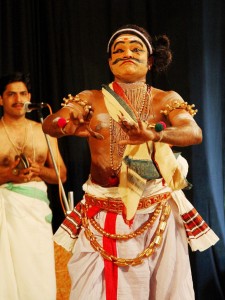 wise Vidura to prepare a secret tunnel that will allow Pandavas to escape from the palace to the forest. While in the forest, demon Hidumban instructs his sister Hidumbi to find out about the human smell emanating in the forest. Hidumbi spies on the Pandavas and is enamoured by the handsome Bhima. She takes the form of a beautiful woman (a special character type known as Lalitha in Kathakali) and accompanies the Pandavas. Bhima kills Hidumba who attacks the Pandavas, in his rage. On being instructed by Sage Vyasa, Bhima marries Hidumbi and lives with her till an offspring is born to them, the mighty Khatotkacha. Khatotkacha takes leave of the Pandavas with his mother and Pandavas duly move to the village of Ekachakram. The mighty demon Baka has terrorized the villages of Ekachakram. Kunthi, the mother of Pandavas, is moved by the distress of the Brahmin family that hosts the Pandavas. As instructed by her, Bhima battles the demon Baka, the cause of the distress of the Brahmin family, and kills him.  Kottayam Thampuran defined Kathakali as a classical theatre with his works. Bhima is portrayed as the quintessential pachavesham (heroic type) throughout this play. Khanakan, stipulated as a minukkuvesham, is a remarkable role essayed by such stalwarts as [Ashaari] Koppan Nair. Pathinja padam (romantic interlude at a slow tempo) between Bhima and Lalitha is perhaps the highlight of the Bakavadham play. While all these concepts framed the fundamental tenets of Kathakali, perhaps the most delectable theatrical contribution of Thampuran would be his definition of the nuanced female role Lalitha. The scope he has envisaged for Lalitha and the different hues he has brought across Hidumbi in Bakavadham, Simhika in Kirmeeravadham and Urvashi in Kalakeyavadham are among the most beautiful aspects of performing arts even when seen at a global level.